What does the Deliverance ship and the history of shipbuilding in Bermuda have to do with digital technology?

Patrick Mahon, Head of Design Technology at Saltus, and a group of SGY1 students recently embarked on a project to link the two concepts.

“The project started when our students decided to build a 10-foot canoe,” Mahon said. “It was not the first boat that had made in the department [the previous one was auctioned at a recent event for financial aid]but it was the first for these students.

Mr Mahon continued: “But it is extremely important that you understand that we are not just building a boat here. It would just be using and learning practical skills. Don’t get me wrong, these are important skills for students to master, but this project is so much more than that.

“Anyone who has built anything knows how important it is that everything is cut to size. But what to do when the sides are not straight? When are organic forms involved? When getting it wrong can cost money and possibly jeopardize the whole project? The answer is technical drawing and math, a cornerstone of this project.

“The project goes even further, for example, the lesson started the other day with the question, ‘imagine you are on a lake in your boat and in the boat there is a big heavy rock. You decide to throw the stone overboard. Is the lake rising or falling? It’s a question around buoyancy, the application of physics and Archimedes’ principle [if you are wondering, it falls].

“Hands-on, math and science skills are a key part of the project, but it’s important when building a boat not to deny Bermuda’s rich maritime heritage and history,” Mahon said. .

“That brought us to the question; how the survivors of the Sea Venture managed to build a ship worthy of the sea [the Deliverance] who sailed to Virginia ten months after being shipwrecked on the reefs off Bermuda in July 1609? 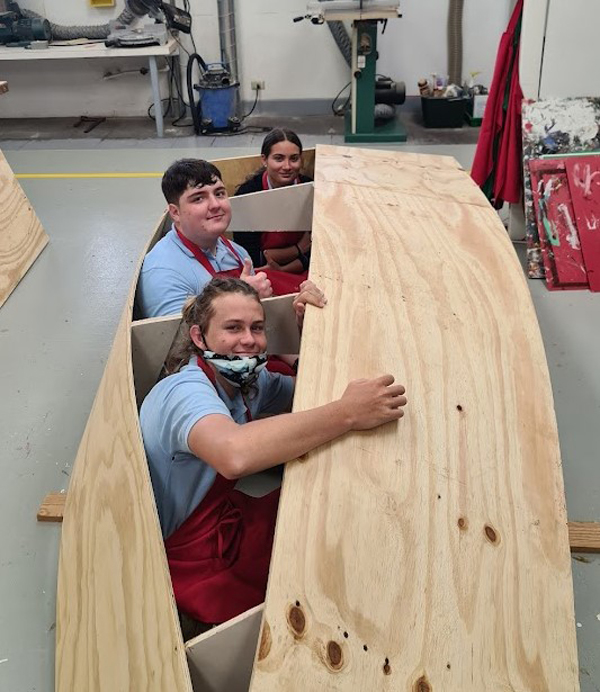 In order to answer this question, Mr. Mahon worked with Dr. Derek Tully to organize a trip to St. George’s to meet a craftsman, Mr. David Chew, who not only maintains the Deliverance model, but knows its history very well. .

When the students arrived, Mr Chew explained how Deliverance’s hull and ribs were formed. “Remember Sea Venture was a flagship that had skilled carpenters on board and they were able to salvage their tools from the wreckage.”

Mr. Chew pointed to Towne Square in St. George. “The whole island was covered in cedars, so they used their basic saws to cut the trees down to the required keel size.”

One of the students noted how Mr. Chew “explained how the curved branches of the cedars were used for shapes such as the front section of Deliverance and that it made sense to use natural shapes wherever possible” .

The students also recognized the similarities between the pulleys of Deliverance and the yacht along the quay in St. George’s Harbor as well as the different types of knots. The yacht’s pulleys were made from modern materials but performed the same function as those designed over 400 years ago.

This is just one of many projects undertaken by Saltus Design Technology that combine practical skills with scientific and mathematical principles. Mr. Mahon explained that they do their best to make the projects challenging, rewarding and relevant, following the basic principles of project-based learning.