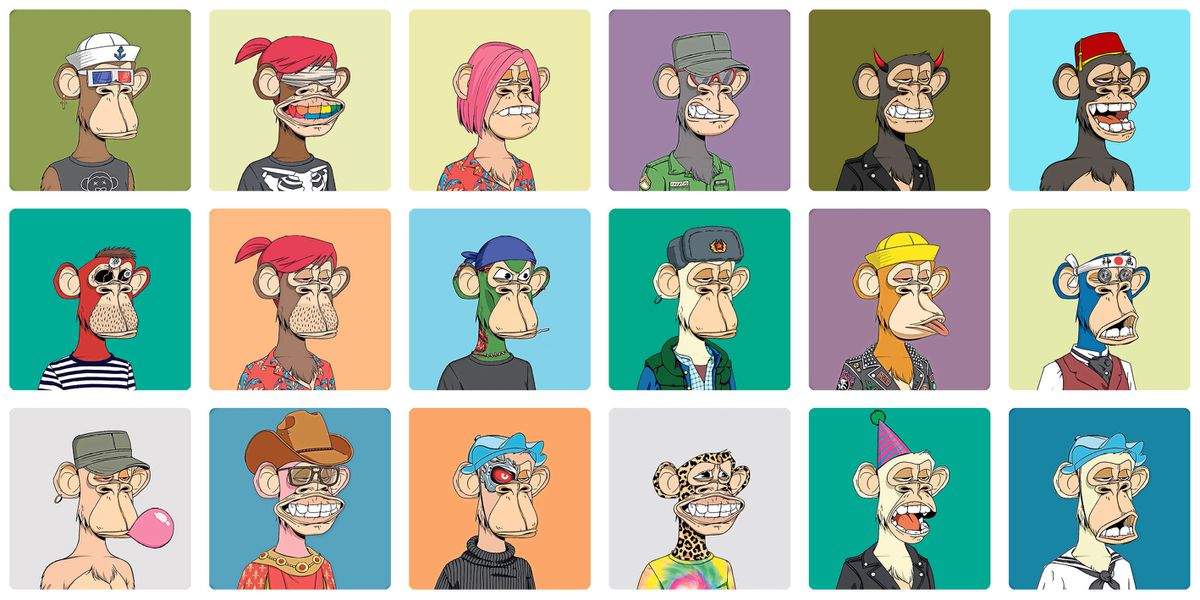 On March 11, one of the most important auctions of recent years took place at Christie’s, in absolute silence. There were no heated auctions and nothing went under a noisy hammer, but large sums were still changing hands: the artist known as Beeple sold his work “First 5000 days” for $ 69.3 million.

“It was the third highest award ever for a living artist,” said Beatriz Ordovás, director of the post-war and contemporary art department at Christie’s Spain. This sale was a milestone not so much for the price, but for the first time that a major auction house offered a purely digital work of art that would be paid for in cryptocurrency and auctioned online. The authenticity of Beeple’s work was guaranteed by a non-fungible token (NFT), a unique digital certificate linked to a file.

In a world where everything can be reproduced by a simple copy and paste, NFTs give an image a unique character and give it exclusivity. “They work as a guarantee of authenticity,” Ordovás explained. Beeple’s work, a huge collage made up of 5,000 images taken over the same number of days, may have artistic value, but it is the NFT that is associated with it that gives it an economic value. Some see these assets as a revolution that will forever change the art world, while others denounce what they see as a bubble that will burst and leave only a trail of smoke.

Before going down in history at Christie’s, the average value of a Beeple work hovered around $ 100. “Digital artists couldn’t sell their art like those who work in the physical world. The NFTs have put an end to this discrimination, ”explained Primavera De Filippi, researcher at the Berkman-Klein Center for Internet & Society at Harvard University and at the French National Center for Scientific Research. De Filippi has an optimistic view of technology and believes that it has improved the work of artists such as Beeple by reproducing the limits of the physical world to drive up prices: the value of a work, ”she said . NFTs have introduced new artists to the art market, she believes, and have introduced new buyers as well.

The value of the digital art market grew by 299% last year, according to the 2020 NFT report, and that’s just the tip of the iceberg: the luxury market, video games, music and more. sports teams also want a share. Jack Dorsey’s first tweet from Twitter was sold as an NFT for almost $ 3 million in March. Days later, the Nyan Cat (a cat with a rainbow trail) meme hit $ 600,000. Singer The Weeknd sold a collection of music and videos last April for $ 2 million in the form of an NFT. Ozuna, Steve Aoki and other musicians also jumped on the bandwagon. The Hermitage Museum in St. Petersburg will photograph and symbolize his works, selling images that are in the public domain for thousands of dollars. Virtually any asset could be sold for an astronomical amount.

These NFTs are not purchased with legal tender, but with cryptocurrencies, usually Ethereum, the currency of the Ethereum blockchain. Blockchain technology guarantees the veracity of transactions on the Internet, and due to Ethereum’s central role in the growth of NFTs, its value has climbed more than 1,700% since the start of 2020. Many believe that this growth is not not organic.

“There is clearly speculation,” said Andrés Guadamuz, professor at the University of Sussex and expert in digital intellectual property rights. “Many of us who have watched this world have been taken by surprise by this fad,” he added, setting the tipping point early this year and the sale of Beeple’s NFT.

Ever higher prices, however, are now starting to indicate an overheated market. The activity associated with NFTs varied considerably across all traceable measures. The number of people using NFT markets fell 80%, from a peak of 650,000 at the start of the year to around 128,000 in the first week of August. Sales volume approached a staggering $ 200 million last February, but interest fell sharply in the following months, hitting just $ 25 million in May, according to the Statista website. Some saw it as the agony of NFTs, while others thought they were only proving their extreme volatility. The market ended up agreeing with this last opinion, since in August the sales of NFT set a new record (206 million dollars).

What happens next is a guess. “Ethereum is a very unstable cryptocurrency,” Guadamuz pointed out, “and as such, the astronomical prices we are talking about are, to some extent, illusory.” Ethereum’s see-saw prices and lack of real-world uses are driving investors to make risky bets, increasingly disconnected from physical reality, like playing poker with Monopoly money. “It’s very real,” lamented researcher Primavera De Filippi. “You can’t buy with Ethereum, but you can exchange it for legal tender whenever you want. It’s like saying gold is a fictitious asset because you can’t buy bread. with gold bars.

Speculation was part of the art collection long before the arrival of the NFTs. But the novelty and ignorance of the technology make it much riskier. “Trading new and relatively unknown instruments, such as NFTs, is not so much a form of investing as it is a bet,” said Jo Michell, associate professor of economics at UWE Bristol. The bet is risky because market trends are not dictated by relatively predictable behavior like the bankruptcy of a business or the progressive career of an artist. “A lot of the action is driven by herd hunting,” Michell added. But in the crypto-art herd, not all cattle are created equal. “The very rich are willing to spend lump sums on status tokens, such as NFTs,” the economist said. “It leads other more humble investors to emulate them.”

Another reason for crypto-art fever is less often seen: psychology. The emotional attachment we have to certain objects and the social status with which we imbue them affect our understanding of their value. The collection is based on this process, from stamp collecting to the bubble mania of 17th century Holland’s tulips, when tulip bulbs were sometimes traded for mansions, in the craziest example of how the collection can generate economic distortion.

Matt Stephenson is a doctoral candidate at Columbia University studying behavioral economics and NFT from a psychological perspective. “People are excited about them because they have certain properties of real world objects that we are used to,” he explained. “They are unique, can be owned, sold, destroyed and tracked over time. As a result, if an artist creates NFT art, it has the same properties as a traditional painting.

“The fact that people pay millions for an NFT but not for a JPG file, which is also used to record digital images, says more about us than the art market,” Stephenson said. “Cognitive psychology suggests that humans can distinguish virtually identical objects based on a complex set of socially accepted interests, beliefs and intentions,” he said. Value therefore has a strong social component.

In early May, Kyle Swenson’s Twitter feed began to fill with monkeys: monkeys in sunglasses, monkeys in Hawaiian shirts, monkeys in sailor hats, with frozen smiles and grimaces. It was all a little strange, Swenson thought, until the 25-year-old salesman from Florida bought his own monkey avatar. He had joined the Bored Ape Yacht Club, a website selling avatars related to NFT. The site launched on April 30 and has listed 10,000 images of primates for sale. Each avatar, with a comic book aesthetic and unique features, was released for around $ 200. They were gone in a day. Most users have bought more than one to resell or trade in. Today, they can only be bought second-hand on the Open Sea platform, and the cheapest costs around $ 45,000. While the rarer monkeys reach astronomical numbers, more common specimens are more readily available. In a way, they’re like baseball cards, but with a lot more money at stake.

Swenson has two Bored Apes, two Bored Ape Kennels, Goatz, Pudgy Penguins, Alien Boys … These are all part of different NFT collections. Just as there used to be football and Disney movie stickers in a newsstand, there are NFT collections of all kinds on the internet. The bored monkeys are the last to prevail. The first, and most successful, were the CryptoPunks. One of those eight-bit images sold at Christie’s last May for almost $ 17 million.

So why are people paying such exorbitant amounts of money? “Artistically, I would say they’re crap,” Guadamuz said bluntly. “But the value of the CryptoPunks is that they were the first.” De Filippi agrees with him, recognizing their simplicity and drawing an avant-garde lineage. “It’s like [Marcel] Duchamp, who was the first to create ready-made works [everyday objects that were transformed into art only through their context]. This is why his works have value, because they are pioneering.

The first rule of the Bored Ape Yacht Club is simple: monkey see, monkey do. “Before I joined, I barely had Twitter followers, now I have a few thousand,” Swenson proudly confessed. The social component of NFT communities is important for collectors, as getting status and making noise about your collectibles can drive up the price. Basically what makes you cooler sometimes makes you richer too.

There are no yachts or monkeys, but the Bored Ape Yacht Club really functions as a social club. “When you buy a primate, you join a community,” said Swenson, who also founded the Bored Ape Gazette, the go-to newspaper for that community. Stephenson has confirmed that there is a great deal of social psychology in the rise of these collectibles. “There is definitely a fun, even childish feel to collecting NFTs,” he said. “And showing them to your friends, collecting the rare ones … is definitely part of the appeal.”

This expert believes that the success of NFT collectibles depends on what is now known as the attention economy. Stephenson’s profile photo on Twitter is a monkey with a funny face, which means he’s easy to recognize as one of the 10,000 avatars at the Bored Ape Yacht Club. It was a gift: “That’s why he has a birthday hat.” Stephenson, like many others, joined the party. And this is the one that seems far from over.

A history of digital art through a feminist lens