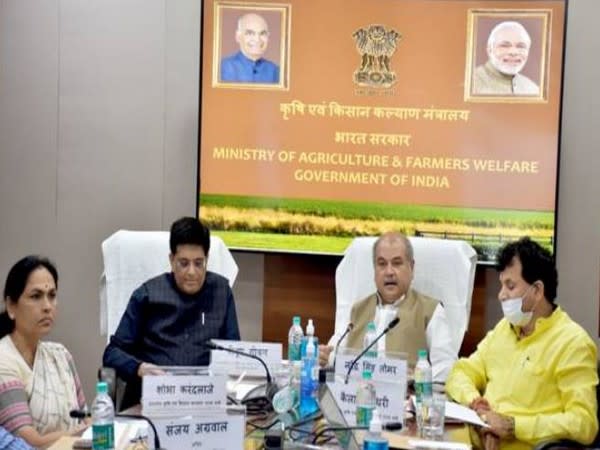 New Delhi [India], September 6 (ANI): Union Agriculture Minister Narendra Singh Tomar on Monday said agriculture must be linked with digital technology, scientific research and knowledge, and stressed the need for central government and state governments to work together to make agriculture a boost to the economy.

At the Chief Ministers’ Conference on Ministry of Agriculture and Farmer Welfare (MoAFW) Initiatives and Programs via video conference, Tomar spoke about digital agriculture and urged all states to study the Karnataka model, presented at the conference.

According to a MoAFW press release, Tomar called on states to create a database using the Federated Farmers Database prepared by the Government of India and allow the link to the state land registry database. .

Speaking about the Oil Palm Mission, Tomar said that the Indian Agricultural Research Council (ICAR) has conducted a study on areas where oil palm cultivation can be extended.

Union Trade Minister Piyush Goyal said that with an increase in agricultural exports, India is emerging as a trusted export partner and there are still opportunities for improving agricultural exports. He stressed that the infrastructure needs to be strengthened for storage and warehousing.

According to the statement, the objectives of the conference were to highlight the main features of AatmanirbharKrishi and enable states to improve farmers’ incomes. It was also an opportunity to share the innovative initiatives undertaken by the States.

“The discussion with the States focused on the Agricultural Infrastructure Fund set up to stimulate investment in infrastructure. Recent changes to the program were explained: eligibility has been extended to APMS / State Agencies / National and State Federations of Cooperatives / OPF and SHG. Eligible activities were explained such as community agriculture, assets, post-harvest management projects and primary processing, ”he added.

In addition, the need to make India self-sufficient in edible oils and palm trees was highlighted and the role of states was discussed. Digital agriculture and the use of emerging technologies for smart agriculture were also discussed.

During the virtual meeting, the concept of the farmer database was explained.

“A national farmer database is being created taking data from existing programs such as PM-KISAN, Soil Health Map and PM Fasal Bima Yojana. The database will be connected to the state land registers database. The Pradhan Mantri Kisan Samman Nidhi and saturation Emphasis was placed on upgrading the beneficiary database, on the export of agricultural products and on the role of APEDA (Authority for the development of exports). processed and agricultural food products) in increasing agricultural exports. APEDA will facilitate the cluster-centered capacity building exercise for government officials, FPOs, farmers, start-ups, etc. », Indicates the press release. (ANI)

Tourism powered by digital technology in the spotlight at CIFTIS – Travel