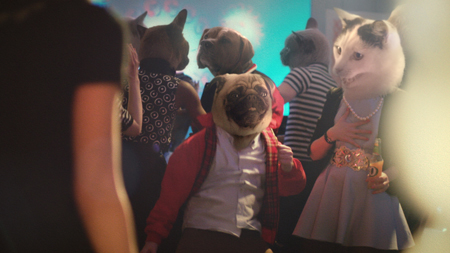 Absolute, BBH, and Pretty Bird have joined forces to create “A Bottle of Togetherness”, using computer graphics and live footage to create a world where dogs and cats can resolve their differences around one. Britvic J2O bottle.

BBH brought in the Daniels, directors of Absolute and Pretty Bird, to turn a house party into an extremely entertaining place featuring rival animals thrown into normal human situations, united by their drink of choice. The live-action ad, augmented by CGI, captures a typical house party scene as a group of dogs show up at a party full of cats. As the cats begin to encroach on their unwanted guests, the tension is broken by a four-pack of J2Os, leading to a night of dancing, relationships and hilarity. The wellness spot even explores an unexpected romance that blossoms between a dog and a cat. All is well with the world, until a mouse shows up at the party …

“We first chose our office dogs Alfie and Larry to test different composition techniques that would combine human bodies with animal heads,” says Absolute producer Dan Bennett. “Then we were very involved in the editing process, helping to select the dog and cat performances that best suited the movements of humans.

Absolute Flame artists Phil Oldham and Michael Smith attended the filming in East London to assist and oversee the visual effects shoot. The team originally intended to shoot the cat and dog heads in situ as plates, but some of the animals were too large to fit on the set. Eventually, a green screen studio was built and the team captured the heads using two cameras filming simultaneously from different angles.

“Ask any Flame artist what they find the most difficult and they’ll tell you they’re replacing the head,” says Phil Oldham, Absolute Flame artist. “That, combined with the fact that a dog or a cat can’t steer, was no small feat. Luckily, BBH and the Daniels both trusted and knew visual effects incredibly well. No explanation was needed, and they pushed for the best result.

Working closely with the agency and production teams, Absolute used a mix of live action compositing and CG augmentation to create the scenes and characters. Flame from Autodesk, Nuke from The Foundry and Final Cut Pro from Apple were the main platforms used.